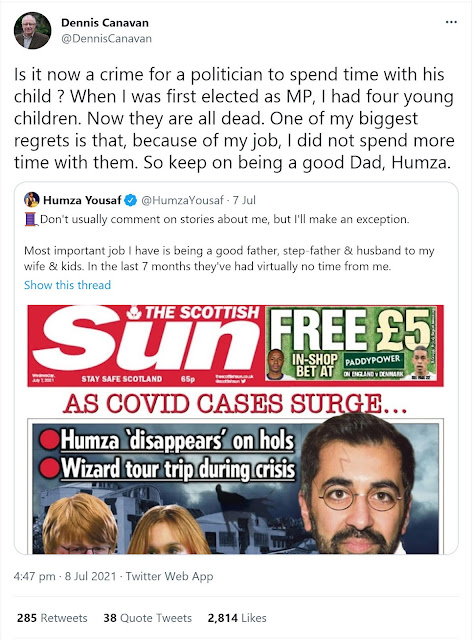 Dennis and I go back a long way - we shared a platform at a fringe meeting at a Scottish Labour Party conference on the subject of organising unemployed workers in oh, must have been the later 1980s. So what I say now is more in sorrow than in anger.

"Is it now a crime for a politician to spend time with his child ? When I was first elected as MP, I had four young children. Now they are all dead. One of my biggest regrets is that, because of my job, I did not spend more time with them. So keep on being a good Dad, Humza."

- tweeted Dennis and I replied as follows

Yes Humza, keep on being a good dad but stop being such a Useless Cabinet Secretary and resign!

Is it a crime for a gentleman to seek to start a family of his own by attempting to court the ladies in a respectful way? Because the SNP Gestapo say it is - and not once did Humza Useless ever suggest that the courts in Scotland are unjustly criminalising gentlemen, as they are. 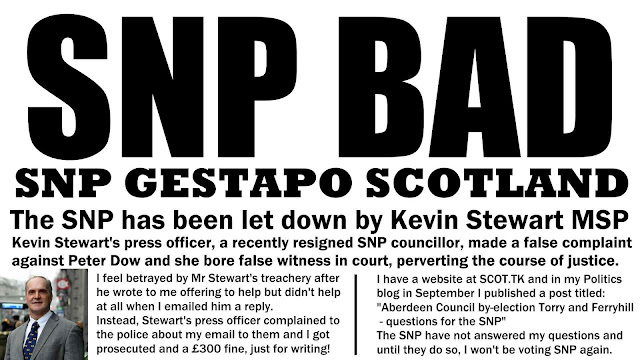 What the independence movement can't have Dennis is the betrayal of the Scots to a fascist like Useless turning a blind eye to gross injustices done to gentlemen - some kind of modern witch-hunt but against older men.

He's moved on from Justice but he's no better at Health. 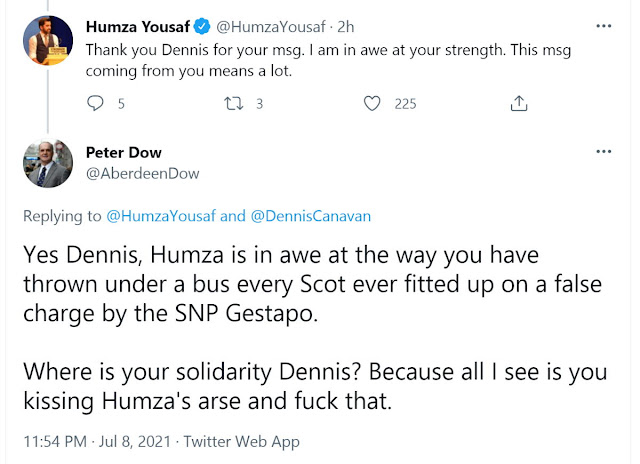 Yes Dennis, Humza is in awe at the way you have thrown under a bus every Scot ever fitted up on a false charge by the SNP Gestapo.

Where is your solidarity Dennis? Because all I see is you kissing Humza's arse and fuck that.

The Scots would very much like to know what your idea of "a crime" is Dennis, because it rather looks like you think a crime is whatever the SNP says it is.

So if the SNP wants to take me or any Scot political prisoner, you'd be OK with that would you Dennis?

That concluded my reply to Dennis but I will note for the record that I was taken as a political prisoner by the SNP Gestapo in July 2014 while Dennis was Chair of the YES Scotland campaign and terrorised by Aberdeen Sheriff Court to stop campaigning online for a YES vote for the last 7 weeks of the independence campaign - and the rest was history.

I didn't blame Dennis for that, nor Humza Yousaf - it was Kenny MacAskill who was Salmond's Justice Secretary governing the police at the time, after all.

What I do blame Dennis for is never since the defeat of the YES Scotland campaign in 2014 has Dennis ever called out the taking of political prisoners during the indy-ref, never once pointing out that no campaign can be correctly claimed to be "free and fair" while political prisoners are taken and individuals banned from campaigning by threat of an accusation of a "breach of bail conditions" and imprisonment - something I have complained about, a lot! 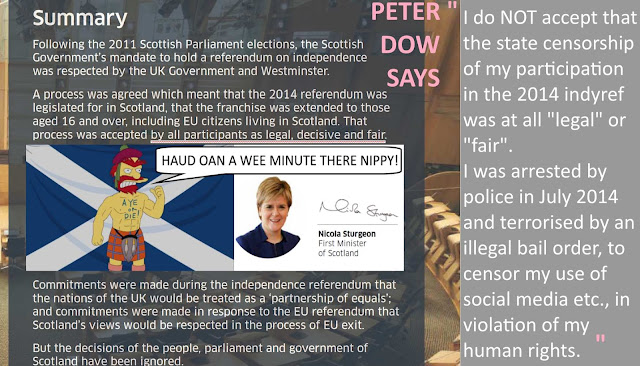 Never once has Dennis called into question the validity of the referendum result achieved as it was with the rigging of the campaign to favour the NO campaign by taking YES campaigners as political prisoners, such as myself.

So I do question Dennis's fitness to lead the Scottish independence campaign though I note that he is still quoted by the National now and then.