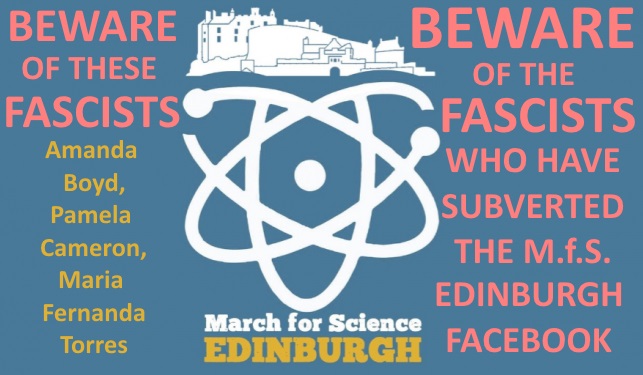 TO QUOTE FROM "March for Science - Edinburgh"

"Amanda Boyd
Hi Mods...I wonder if Peter Dow's post, below, shoud be removed? I'm all for free speech, but this is distinctly political, (if somewhat irrational), and therefore should not be promoted here? Cheers."
____
Pamela Cameron
Agree. I think we do him a disservice by giving validity to his claims, which he seems to sincerely believe.
____

"Maria Fernanda Torres
I decided to remove it after the post was reported and after reading this post. I didn't do it Initially as I believe everyone has the right to discuss, post and reply. He wasn't using any offensive language and he wasn't spamming. This group is meant to be inclusive and respectful of people's opinions, whether we agree or disagree with these, and the idea is to promote healthy discussions. Though not too much research is needed to have an idea of his speech, many of us are unfamiliarized with him and I (personally) was waiting for a discussion to develop and see if removing it was really necessary. Given the call for it, the decision was made."
________

I'm no Trump fan but the really dangerous threat to science and scientists in Scotland comes from the police state here which raids scientists' homes (well it did raid my Aberdeen home in 2014), seizes our equipment (my computer with all my science data) prosecutes and punishes us (£500 fine to be paid @ £20 a month) - all because the state in Scotland can do whatever it likes because there's no good head of state to stop the state running amok persecuting scientists if it wants to and it does want to whenever anyone, scientist or not, dares to use bad language, robust political rhetoric on social media (a few rhetorical political, republican, anti-Queen tweets) or published elsewhere.

So we need a good elected president who is pro-science HERE IN SCOTLAND, an elected head of state who will bring the state to heel, deliver the rule of law, guarantee civil liberties, legal human rights and academic freedom for scientists and other academics.

So it's good to have solidarity with American scientists battling against the anti-science Trump - but it would be not so good to turn a blind eye and a deaf ear to scientists in struggle here in Scotland against the UK in Scotland fascist police state running amok persecuting anyone it likes including scientists doing our duty because there are in practice no legal limits here to the Queen's royalist, fascist police state.

There is no rule of law here - merely the dictatorship of some senior lawyers (which is different, honest) - so Scotland in the UK is run as a gangster police state but the "gangsters" are really just bad police officers and bad lawyers working for the procurator fiscal service or for the courts as judges. They can and do arrest, fine, jail anyone for the least controversial outspokenness.

I write as a scientist who feels like I have been persecuted for most of my life as a graduate (1982) scientist, since I finished my time as a Glasgow college lecturers, including being persecuted by science professors at Universities (Aberdeen's) who haven't hesitated to call on university managers to exclude me from the campus to exterminate my academic freedom - all because I asked some difficult questions (I was "disruptive" apparently)

I've unjustly spent time in jail or police cells - for not going for a psychiatric examination (2002) for typing comments online (2014, 2016), for simply doing my duty as a scientist and for speaking out a person of conscience doing my political duties.

It's not like I have any friends backing me up, though there was this nice and brave man Professor Jon Godwin, who did one time, which was nice.

Few will stand with me but then again, can you blame anyone for not wanting to step into the firing line alongside me? Who would want to suffer the risk of being dragged down beside me into the hell of social exclusion and being criminalised for my beliefs?

Anyway, I am very happy to stand alongside the March For Science and I wish everyone on the march all the very best.

PS. if you'd like to nominate me for the Sakharov Prize I'd appreciate that very much!

Although I joined that "March for science - Edinburgh" Facebook group in good faith and gave it my initial support, now, in the light of my persecution at their moderator's hands, I have of course to warn about the group which clearly has no principled commitment to freedom.

So this is how academic freedom at our universities has been destroyed.

It starts with a whiny complaint about nothing much but it ENDS IN A DEATH THREAT by the state against the persecuted academic.

And there's no debating this abuse of power allowed either

If you dare to publish leaflets, comment on line, complaining about your exclusion the same lawyers go to court to get gagging orders and if you continue to publish, again you are accused of contempt of court and can face arrest and death while resisting arrest.

The people running the kingdom's universities in Scotland will stop at nothing to save the face of their authorities, to exterminate from "their" campus anyone who challenges their authorities.

Yes the professors and managers who run the kingdom's universities may be educated in their speciality - scientists, engineers, architects, divinity scholars, language experts and so on.

BUT these professors, managers, academics ARE BAD PEOPLE. MORALLY AND POLITICALLY, THEY ARE NO DIFFERENT FROM FASCISTS.

So I find it DISTURBING in the extreme that these bad people are allowed any promoted position in Scotland's universities.

I don't mind them being students, but they do need to learn to be decent principled people first and foremost before being put in charge of anyone else.

We shouldn't have EVIL people managing anything so important as a university, but that's what I think the status quo in Scotland sadly is.
Posted by Peter Dow at 8:35 am 2 comments: