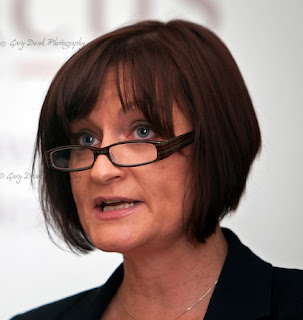 
Court 1 in Aberdeen Sheriff Court, Sheriff Morag McLaughlin informed me that she had read my reply to the Social Enquiry Report (published in my previous blog post).

I offered to speak to my points and read out -

"Deletion of posts on the internet is an expected and proportionate response to instances of immoderate language. I've always been happy to delete or moderate my tweets, posts as required on-line and would do so too for police, prosecutors, sheriffs, social-workers etc.

There was absolutely no good reason to escalate my tweets to a court case. I'm certainly going to do my part to ensure there is no repeat, co-operating with the authorities to that aim."

I then said that the Social Enquiry Report described a number of disposals and I've offered to co-operate with them so as to avoid a prison sentence.

Sheriff Mclaughlin said that she was not proposing to impose a prison sentence and I said I was relieved about that.

She said she was imposing a financial penalty and I offered to pay £20 a month and explained that now I was only in receipt of housing benefit because the DWP had decided that I was fit to go back on Jobseekers Allowance and therefore had stopped my Employment and Support Allowance; I was appealing that decision but meantime had no income but could pay £20 a month from my savings.

Sheriff McLaughlin said she was imposing a £500 fine because it was a serious breach of the peace to be paid up at £20 a month, which was confirmed by the clerk of the court and then I was able to leave the dock the way I wanted to, not in handcuffs nor in custody, which was nice.

Another court official handed me a form to fill out with details to allow them to administer the fine, name and address, National Insurance number, bank details etc, which I did and handed-in before leaving the court room.

I enquired at the Fines Office if I could pay my first £20 there and then but I was told to await a letter from the court about paying the fine.

Not "justice" certainly but as far as miscarriages of justice go, it could have been a lot worse. 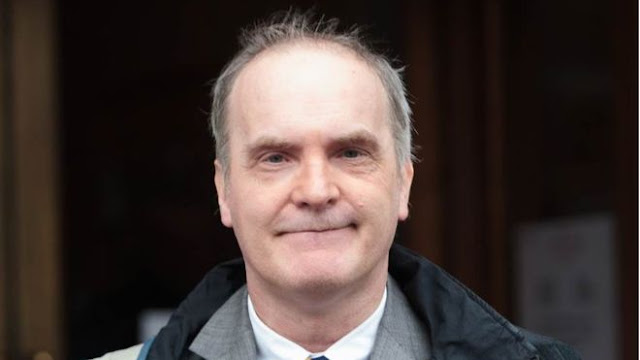 A man found guilty of posting abusive and threatening messages about The Queen on Twitter has been fined.

Alastair Dow's home in Aberdeen was raided by police after intelligence officers saw the posts made during the Commonwealth Games.

He went on trial at Aberdeen Sheriff Court and claimed there was no intended threat behind the posts, but was found guilty last month.

One tweet was said to have read: "It's not a little rest I need but to see your Queen's brains blown out and her body splattered over the ground."

Aberdeen activist who threatened to shoot the Queen on Twitter sentenced 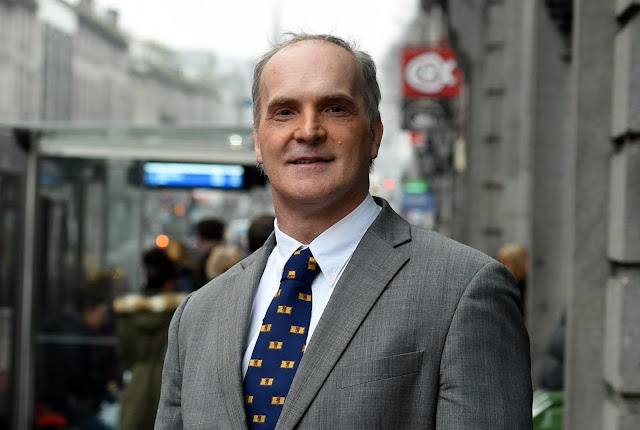 A political activist who sparked a major terrorism investigation after posting tweets threatening to kill the Queen has admitted he is “massively relieved” to avoid a jail sentence.

Alastair Peter Dow took to Twitter during the Commonwealth Games in 2014 to say he was a “man at war for my freedom” and suggesting his “army” would shoot the monarch.

Yesterday, the 56-year-old was fined as punishment for a “serious” breach of the peace. Dow had denied the allegations made against him and claimed his messages had been “blown out of proportion”.

Police in Aberdeen raided Dow’s Hollybank Place address on July 26, 2014, responding to reports he had threatened to harm the Queen in a social media post.

During proceedings, Aberdeen Sheriff Court heard detectives set up a specialist unit to combat terrorism during the Commonwealth Games in Glasgow.

One of Dow’s public messages said he wanted to see the “Queen’s brains blown out and her body splattered over the ground”.

Representing himself in court yesterday, Dow said he was always happy to “delete or moderate tweets”.

“In my opinion there was no reason to escalate my tweets to a court case. I would co-operate with anything to avoid a jail sentence.”

Sentencing Dow, Sheriff Morag McLaughlin said: “I’m not going to impose jail. I think it would be disproportionate. Since this happened in 2014, there’s been nothing else.

“We will always disagree about the seriousness, but I consider it to be a serious breach of the peace.”

Dow said it was a “massive relief” that he will not be forced to spend time behind bars.

A man convicted of a breach of the peace after posting threatening tweets about the Queen has been fined.

Alastair Peter Dow was handed a fine of £500 when he appeared at Aberdeen Sheriff Court for sentencing, having been found guilty after trial.

In one message Dow, 56, of Hollybank Place, Aberdeen, said he was “a man at war for my freedom” and he wanted his “army” to put a bullet in the monarch’s head.

Last month he was convicted of causing fear and alarm by putting offensive, abusive and threatening material about Her Majesty online.

Dow had denied the allegations and claimed the wording of his messages had been “blown out of proportion”.

He said although he composed the posts they should not have been taken literally, but seen as “rhetoric”.

The court previously heard police were sent to Dow’s address in the city’s Hollybank Place on July 26, 2014. They had been responding to “intelligence” claiming material had been posted threatening to harm the Queen.

The court heard the messages had been sent by Dow to users he had not previously met.

However, they could be seen publicly on the microblogging site.

One message stated he wanted to see the “Queen’s brains blown out and her body splattered over the ground”.

Appearing for sentencing before Sheriff Morag McLaughlin, Dow said he had always been happy to “delete or moderate tweets”.

He went on to say: “In my opinion there was no reason to escalate my tweets to a court case. “There are various sentencing options listed in the report – I would co-operate with anything to avoid a jail sentence.”

Sheriff McLaughlin told Dow: “I’m not going to impose jail. I think it would be disproportionate. Since this happened in 2014 there’s been nothing else.”

Fining him £500 the sheriff said: “We will always disagree about the seriousness – but I consider it to be a serious breach of the peace.”

I have recently attended at 74-76 Spring Garden, Aberdeen for a few meetings with one of Aberdeen City Council's social workers, a Mr Brian Hourigan, to co-operate with the production of his "Criminal Justice Social Work Report" which I am publishing today, with the addition of my own annotations in red "ink" which offer my clearer insights into the harmless non-threatening hyperbole of my republican rhetorical tweets in contrast to Brian's report which lacks insight doggedly claiming that my tweets were somehow "threatening", which they weren't, of course. 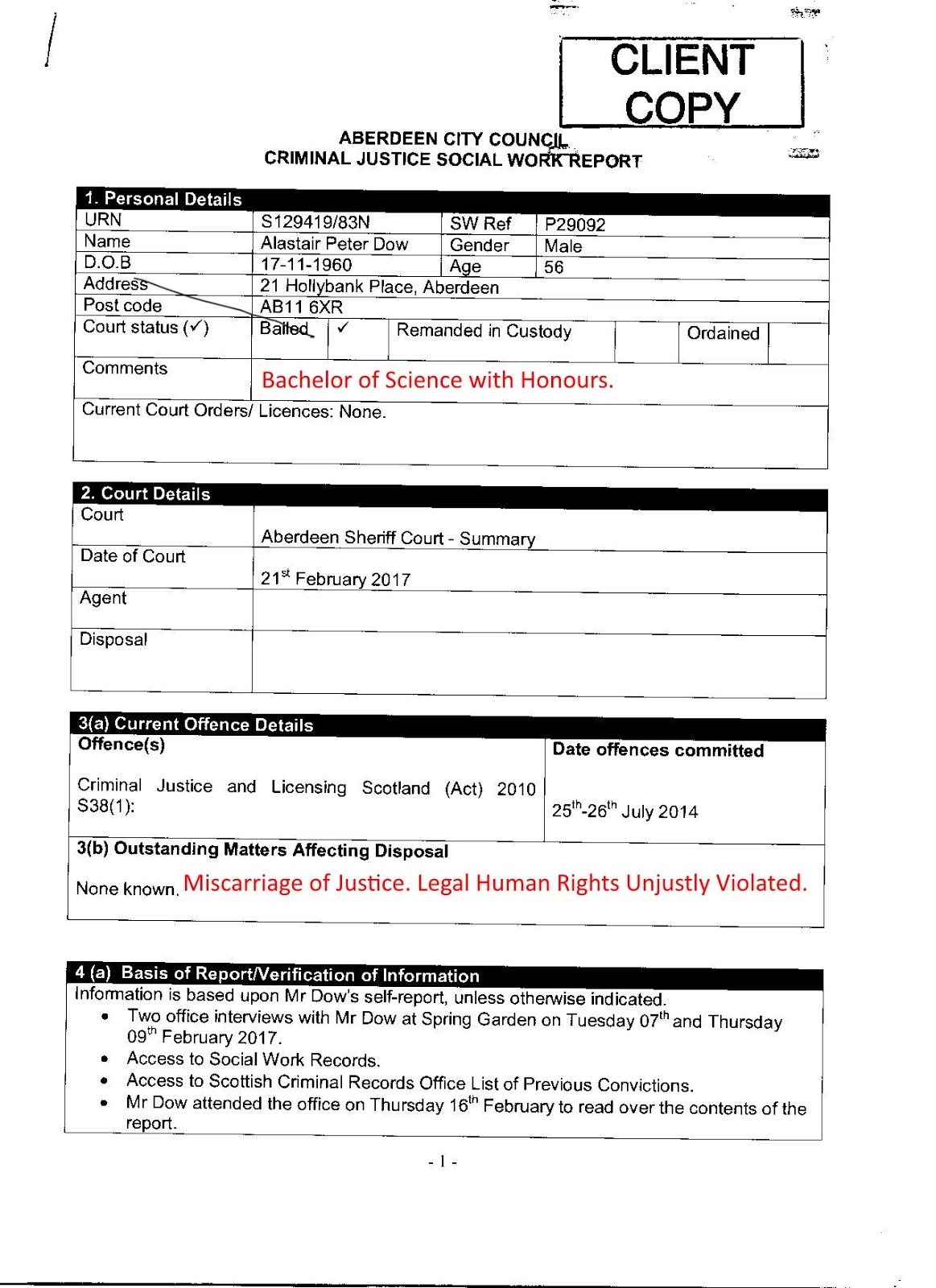 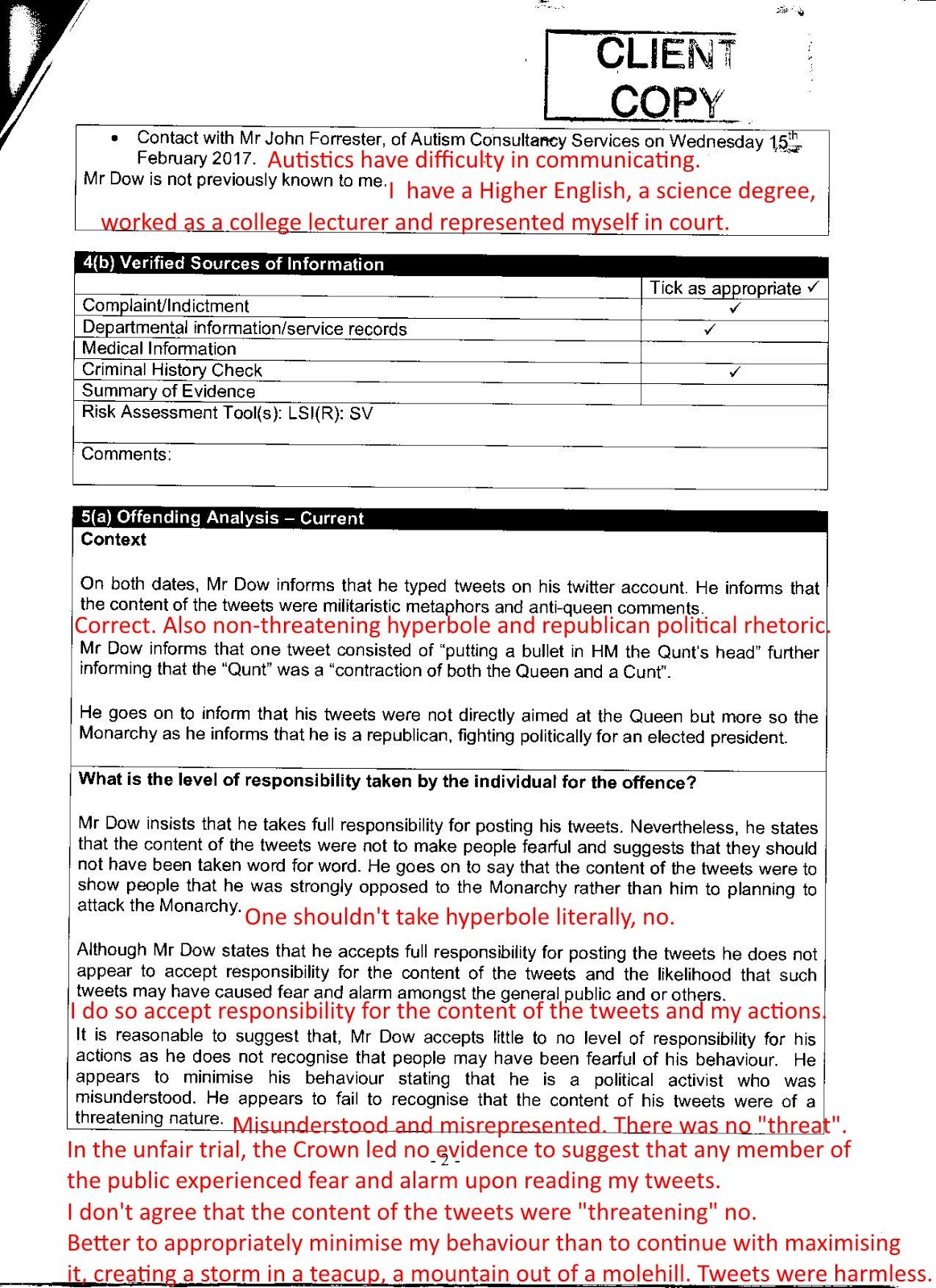 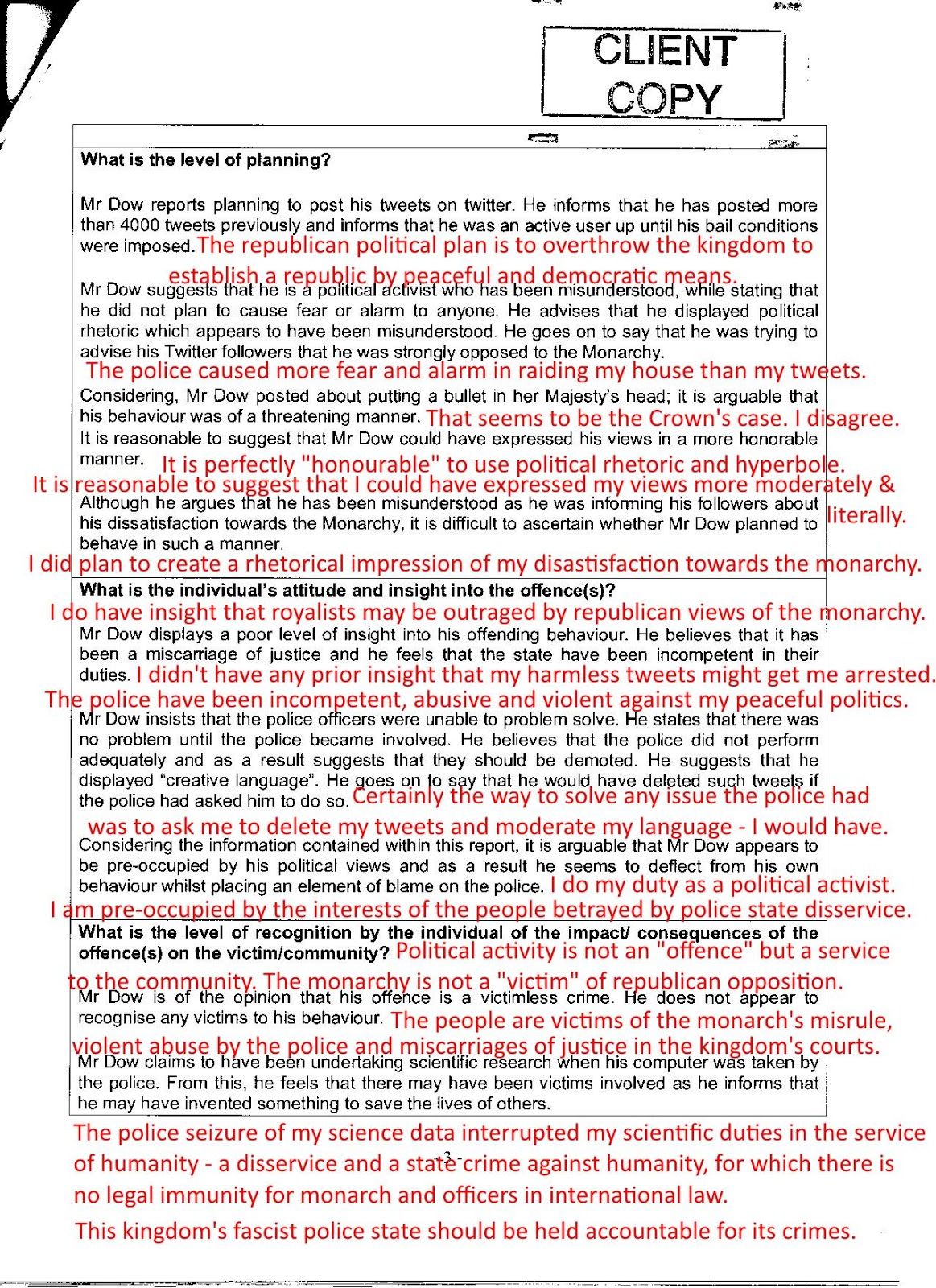 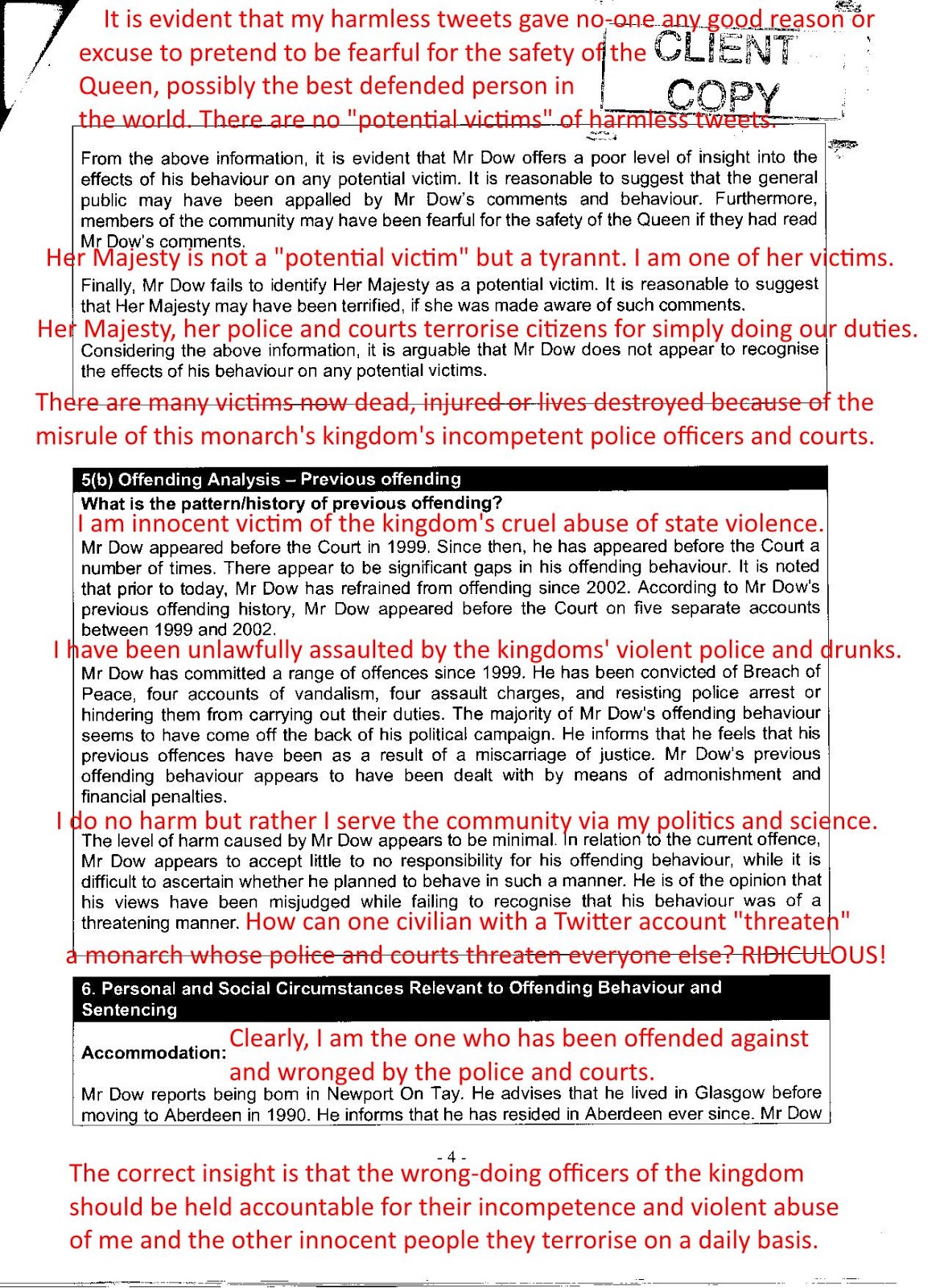 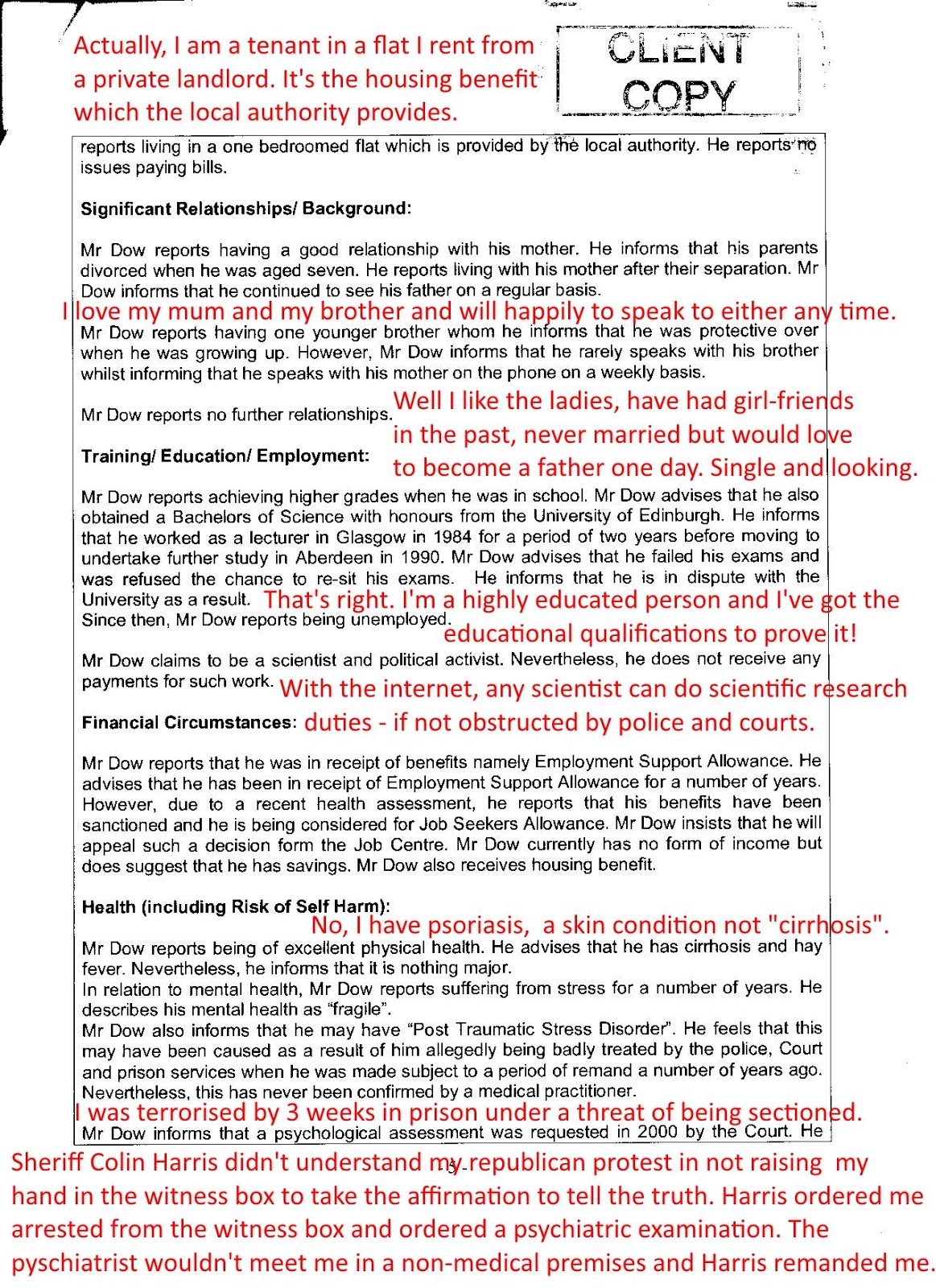 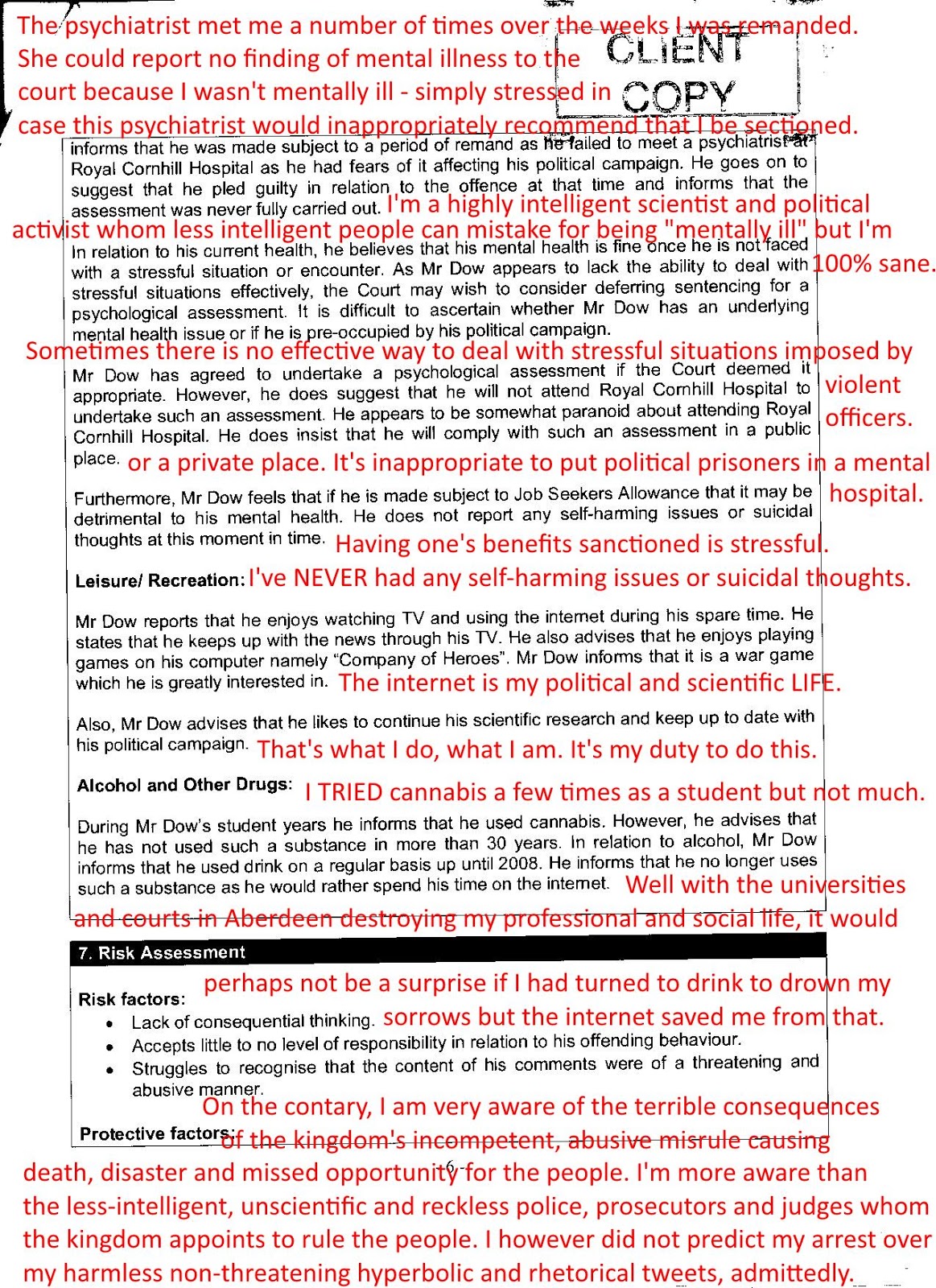 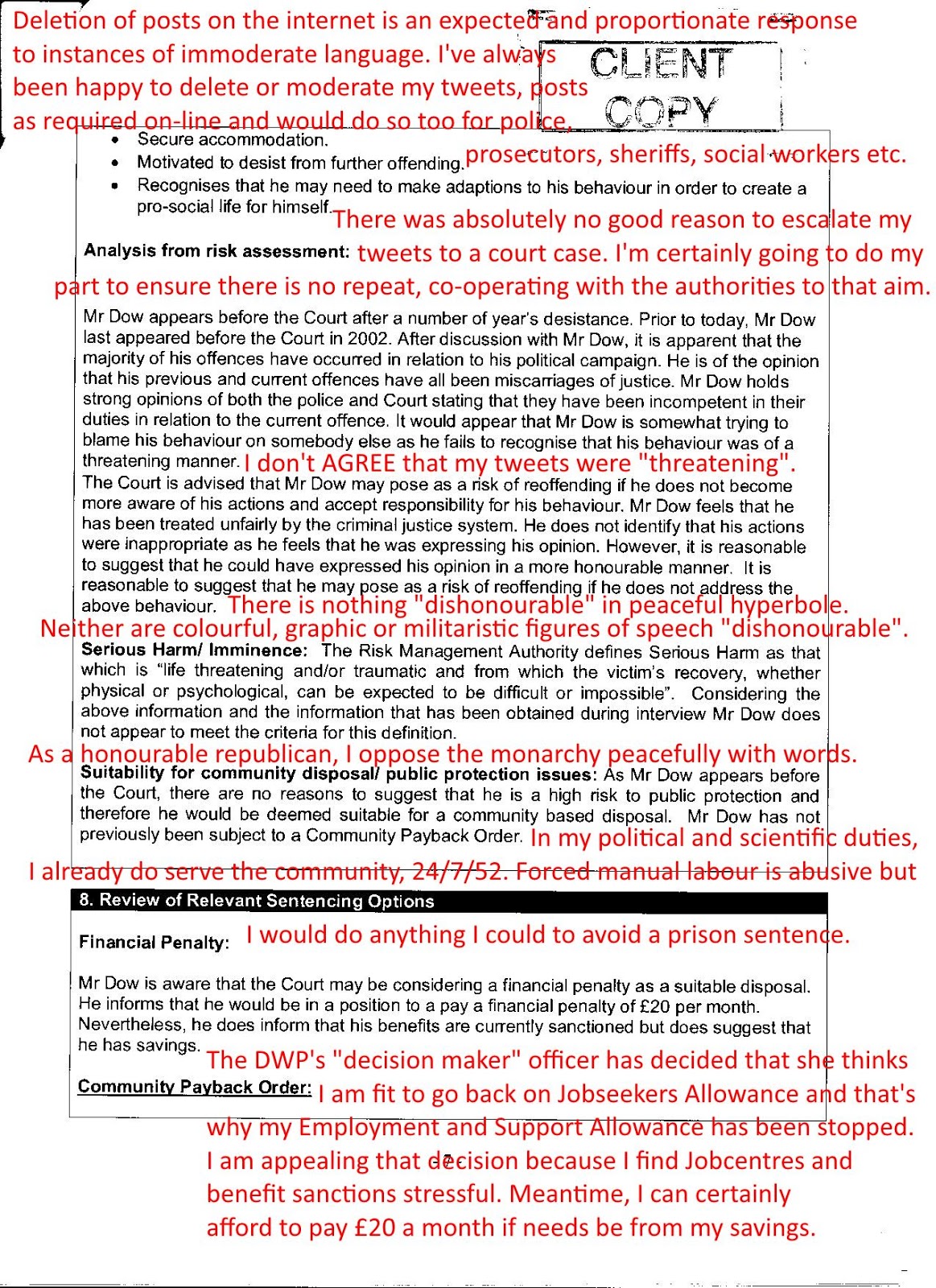 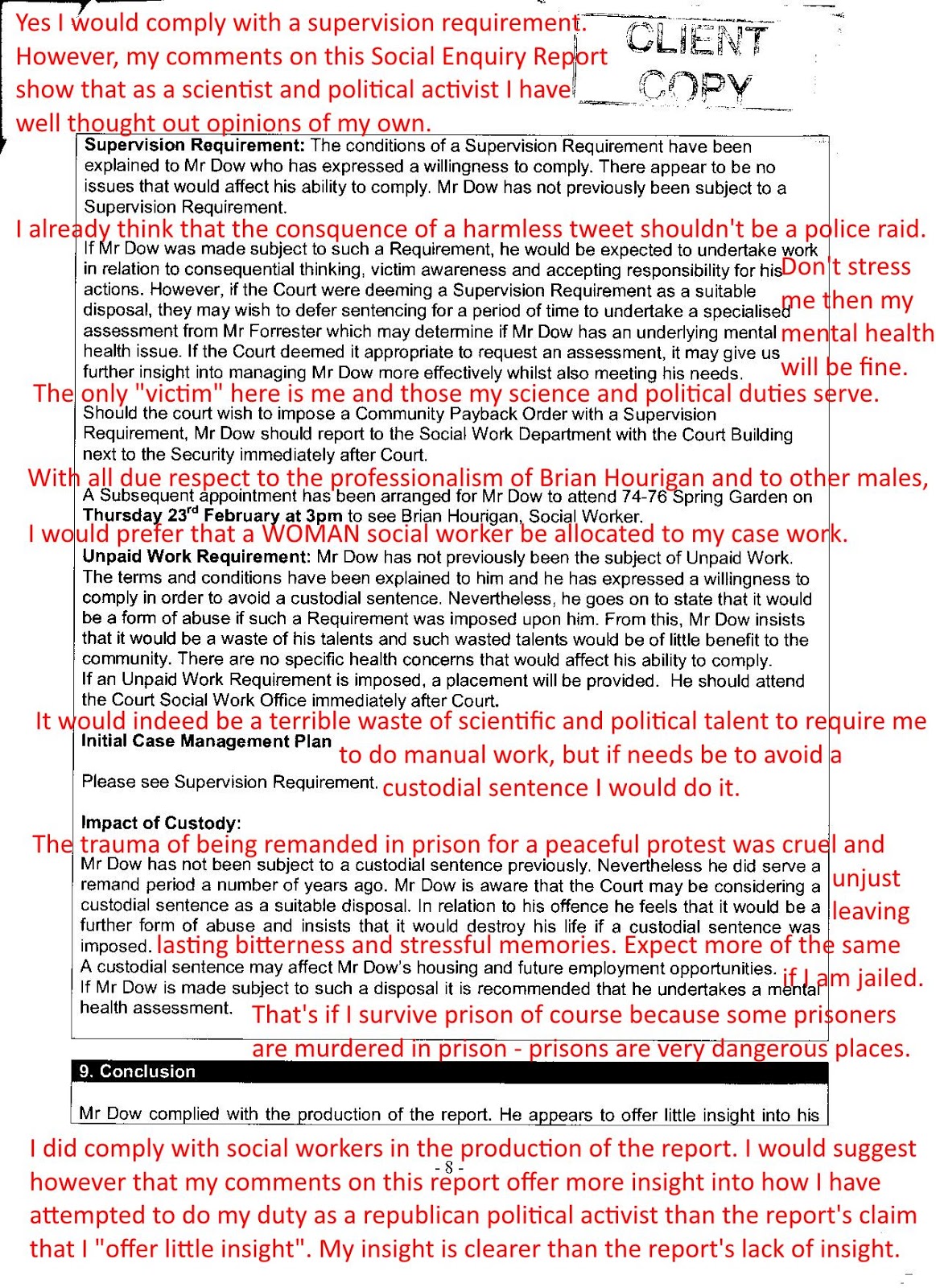 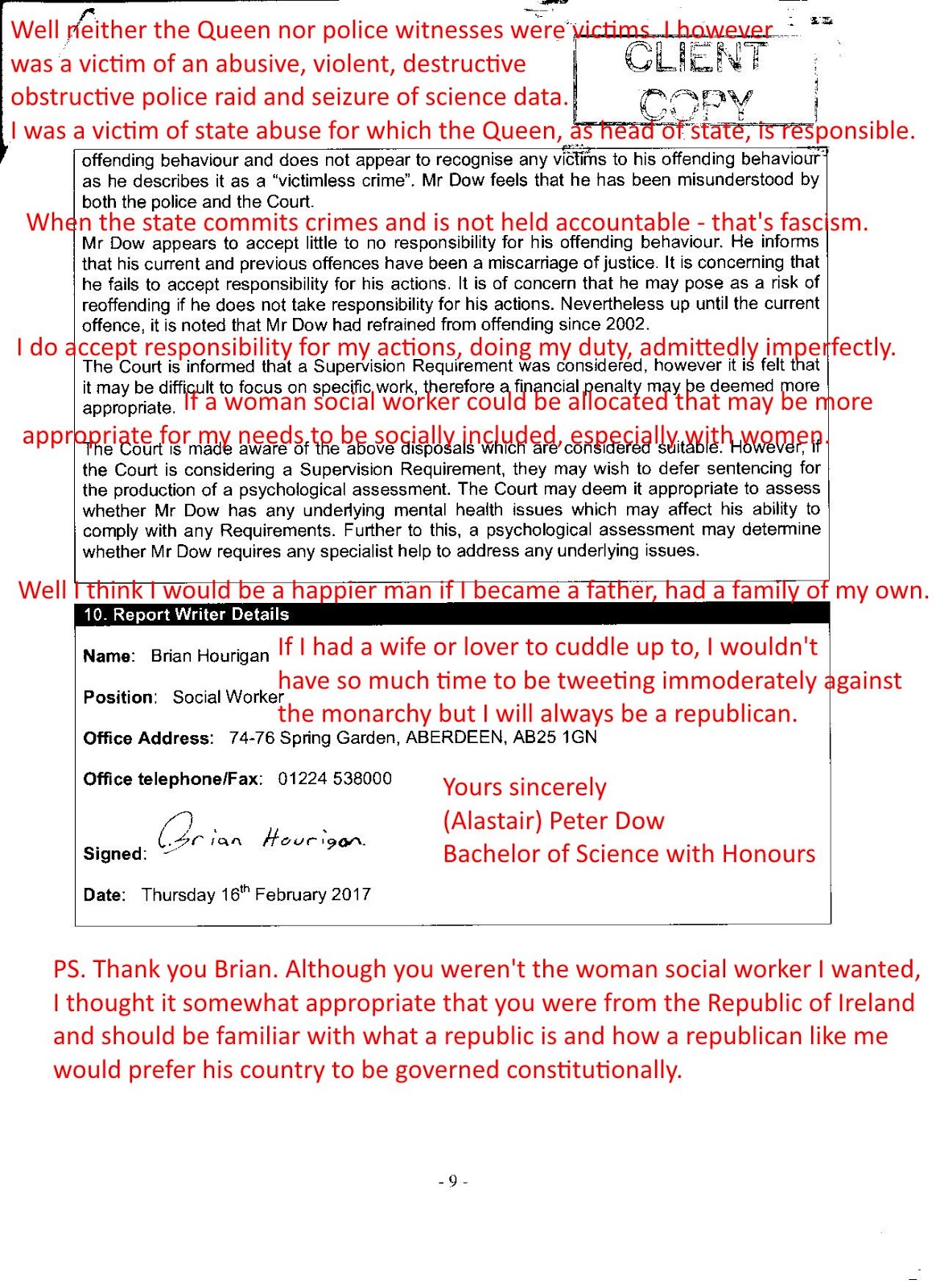 I am appearing in Aberdeen Sheriff Court on Tuesday 21st February for sentencing.