My tweets were political rhetoric - not a "threat" nor a "crime"!

I'm on trial for my @peterdow tweets

The tweets I posted on my @peterdow Twitter account in July 2014, two months before the Scottish independence referendum, employed republican political rhetoric to try to express in the strongest possible terms my political support -
I link from my @peterdow Twitter account to my Scottish National Standard Bearer website at SCOT.TK where I dutifully explain the reasons why the people of Scotland would do better, be safer and be more prosperous, if we exercise our political right to establish a Scottish republic.

None of my tweets were literal "threats" or literally "threatening" that I or anyone else could, would or should "threaten" the Queen.

My tweets were no more "a threat" to the Queen than Alex Salmond's "hold Westminster's feet to the fire" was a "threat" to anyone in Westminster. The police didn't arrest Salmond for making criminal "threats" for the same reason as the police shouldn't have arrested me.

Politicians and political authors alike sometimes use rhetorical language. In my tweets I have employed rhetoric such as figures of speech, hyperbole, brevitas and synecdoche and such tweets cannot reasonably be interpreted literally.

I'm a scientist with many qualifications and a science degree from Edinburgh University. I am an intelligent and educated man and I know the difference between "intelligence and education" and "stupidity and ignorance".

My scientific opinion is that it was stupidity and ignorance on the part of police detectives, prosecutors and sheriffs who read my tweets and quoted them as their poor excuse -
I frankly and openly admit to owning the @peterdow Twitter account and I've offered to delete any of the complained-about tweets which the police or prosecutors would otherwise take action over because no tweet is worth the loss of liberty and property which the police and prosecutors have terrorized me with.


I would note in passing that gagging YES-campaigners, banning any of us from social media, rigged the indy-ref campaign in favour of a "NO" result.
Banning those like me who disagree with the so-called "Edinburgh Agreement" (which, unlike Salmond & Sturgeon, I would not have signed) - rigged the unjust outcome of Scotland still firmly stuck in the UK, ignoring the legitimate demand for a 2-state solution, which would mean establishing an independent Scottish state now, as is the democratic right of the 1.6 million people and the 4 council areas who voted "YES".

Although I am not a lawyer, it seems to me that all this unjustified police state violence and threats which I have suffered is in violation of my human rights in law under these articles of the European Convention of Human Rights -
All of those ECHR articles, except 13, have been incorporated into UK and Scottish law. So if anyone should be on trial for breaking the law, it is those police and law officers of the state who have violated their duty and violated my legal human rights.

I propose that
Sadly, the reality is that "stupid and ignorant police officers and prosecutors who insist on arresting and prosecuting people for their harmless tweets" is what Scotland is cursed with now thanks to the dreadfully incompetent leadership of
who should both be sacked.

Aberdeen is doubly cursed with a dreadfully incompetent area Procurator Fiscal, Andrew Shanks who should also be sacked.

I'm innocent of any crime and no miscarriage of justice can accurately paint me as "a common criminal", because I could only ever be a political prisoner - unjustly arrested, unjustly prosecuted and perhaps unjustly convicted and unjustly punished for lawfully expressing my democratic political views.

The tyranny of the police, prosecutors and courts in this bad kingdom is one of the reasons I am a republican. I believe that we, the people, would serve ourselves more fairly by electing a president as a helpful head of state, not only a figurehead - someone with a duty to hold the officers of the state to account for their abuses.

Scientists must be allowed to get on with our scientific duties in the public interest and in the service of humanity.


I have published new scientific and engineering concepts and proposals regarding -
My irreplaceable science research and development data was held on the computer and memory devices seized by the police. I need that data returned to me urgently to allow me to continue with my scientific duties, as I requested of First Minister Nicola Sturgeon when she appeared with her cabinet secretary colleagues, here in Aberdeen, in February 2015. 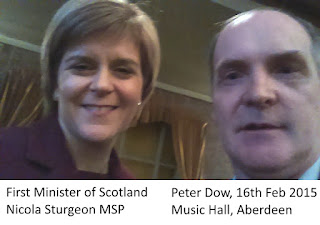 "Good evening to you First Minister Nicola Sturgeon and to your ministerial colleagues. My name is Peter Dow and I thank you for this opportunity to ask you a question.

Please may I have my computer equipment returned to me from the police who seized it when they raided my home in July 2014?

They've taken my scientific research data which is irreplaceable.

The police say they won't return my property unless and until they are instructed to do so by the procurator fiscal service.

My lawyer has written to them, I've written to them but the Procurator Fiscal Service have not replied to state any outstanding reason for still holding on to my computer equipment - and after six months, I'm still waiting.

Isn't it time for the Scottish government's law officers to look into this and then to order the return of my computer equipment?

Also, I noticed that our new First Minister did not appoint new law officers or a new Chief Constable of Police Scotland, and shouldn't ANY First Minister be allowed to pick a new team of colleagues and not be stuck with those from the previous administration?
THANK YOU!"


Later that evening in February 2015, I spoke to Justice Minister Matheson, as First Minister Sturgeon had suggested and I passed to him a copy of my document explaining the circumstances and demolishing the flimsy case against me and requesting that the charges be dropped and that my computer equipment be returned to me.

So I've long since run out of patience with the Scottish government's law officers, who are the failing Lord Advocate Frank Mulholland and the failing Solicitor General Lesley Thomson.

My opinion now is that the Scottish government's law officers should be summarily sacked and replaced by the First Minister because these law officers have violated their duty to ensure that the Procurator Fiscal Service should not prosecute citizens for our political viewpoints and should not violate citizens' legal human rights to freedom of expression.

These failing law officers cannot be trusted with independence from government, nor from the people's elected representatives. I therefore recommend that these law officers be held accountable for their failings and be summarily dismissed from their offices.


A crime against humanity

To interrupt my scientific duties and service to humanity with a police raid and court action amounts to the state harming the public interest and committing a crime against humanity.

No state and no officer of the state should ever dare to obstruct what even one scientist can do for the prosperity of the people and for the benefit of humanity because there can be no "state immunity" for crimes against humanity, as the Nuremberg Trials demonstrated.


No justice for republicans in Queen's courts

I have been victimized, traumatised and offended against in this case and in other cases before this one, by what the sadistic and vindictive police, prosecutors, courts and prisons have unjustly and illegally done to me when, as a good man with a keen social conscience, I have bravely tried to do my duty to my neighbours, my community, my home city of Aberdeen and my country of Scotland and suffered arrests and imprisonment for my good deeds.

So I admit no "previous convictions". I admit only previous miscarriages of justice and wrongs done to me at the heavy hands of the Queen's courts' officials.

Therefore in the unfair show trial on 23rd February 2016 I will be appearing before another royalist court which can so easily do a wrong to me, especially if such court-wrong-doing is thought by wrong-doing royalists to serve their Queen.

I believe that there can be
but, in my republican opinion, there cannot be such a thing as "a court which serves the Queen and the people and does what is right and just, all at the same time".

In serving the Queen, royalist judges often
and so do wrong to the accused and a disservice to the people and therefore it is time to end the status quo of royalist courts, pretending to be "courts of justice" which royalist courts realistically can never be.

No doubt my lawyer will do his best on the day but I believe that my best political defence can only be published by myself, in my blog, in emails and in press releases.

Please pick one or more from the following list of suggested tweets. Simply copy and paste your pick of texts to your Twitter page and tweet them!


You may notice that I have included today's day "" at the end of those suggested tweets. I would like you to tweet these tweets today please and also tweet them again on future days when you have the time.

The blog post updates the date every day so simply copy and paste the tweet texts from the blog post to be sure to include that day's date so that the tweets will be unique - which matters because I think Twitter can ignore identical tweets from the same person.

Or compose your own tweet but do include the link to this blog and a couple of hashtags so that, providing your Twitter has enough followers, your tweet will appear in hashtag searches.

Please post a link to this blog on another social media network or on an on-line discussion forum of your choice.

Scientists for Freedom of Expression in Scotland 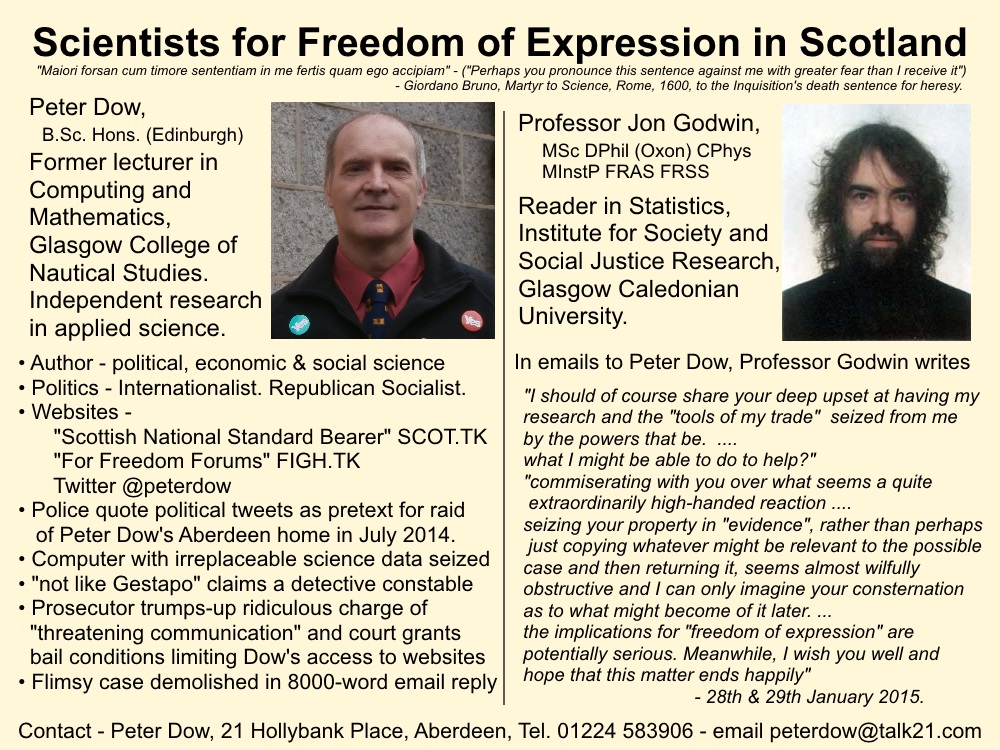 
"I should of course share your deep upset at having my research and the "tools of my trade" seized from me by the powers that be. ...

what I might be able to do to help?"

"... commiserating with you over what seems a quite extraordinarily high-handed reaction to it, in particular considering the sometimes very colourful conversations one encounters daily on internet bulletin boards, etc etc. In particular, seizing your property in "evidence", rather than perhaps just copying whatever might be relevant to the possible case and then returning it, seems almost wilfully obstructive and I can only imagine your consternation as to what might become of it later. ..."

"the implications for "freedom of expression" are potentially serious. Meanwhile, I wish you well and hope that this matter ends happily."